“A completely different outlook on how music can change peoples’ lives…”

During PMZ’s ‘Extraordinary Times programme’, we’re setting out to listen and learn during this lockdown. As part of that we’ll be inviting a series of guest bloggers, people who who’ve experienced up close what we do. To kick us off here is one of our volunteers from the University of Plymouth. Emily Pembridge provided support for PMZ’s weekly percussion session for adults. Emily describes how Rob and the group took her on a percussion journey that opened her eyes to the power of participation. ‘Baton Beats’ is led by PMZ Intergenerational Coordinator and Music Leader, Rob Tilsley. Find out more about the session here. 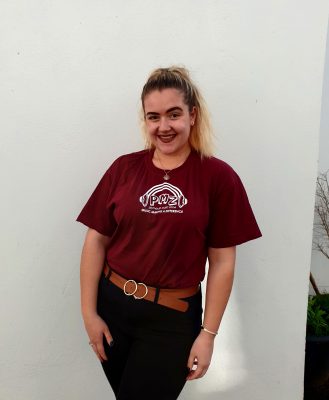 In year seven, I was always the girl in music class that would grimace at my classmates repeatedly pressing the DJ button on the keyboards. In year eight, I would insist on carrying out the musical tasks on my own without a partner. I began classical training on piano and voice at 13 and spent every spare moment developing these skills. I would skip PE lessons in school and use the excuse “I have a music lesson!”

When I went through a traumatic experience aged 16, I realised just how therapeutic music-making and songwriting could be. I realised that for me, music was no longer just a hobby, it was quite honestly my soul. That’s what sparked my desire to use music to help other people when they were at their most vulnerable.

When I began my music degree at the University of Plymouth, I heard that there was an opportunity to do outreach at PMZ as a student ambassador. I desperately wanted to join and finally, in my third year, I got the chance.

“Joining PMZ was definitely a learning process and a shock to the system.”

If I am honest, the first session felt overwhelming. Firstly, I was useless at rhythms, so picking up the drum patterns and then assisting the teaching of these was very difficult! Secondly, I had never worked with such a mix of people before. I had to quickly learn how to adapt my approaches both musically and communicatively to keep up with the sessions. Often, I would be confused about the drum patterns that I was supposed to be helping the participants play. 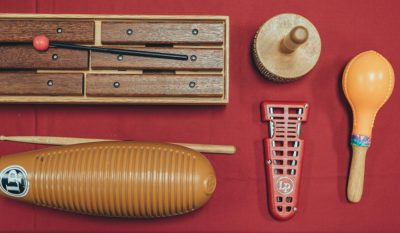 As the weeks progressed, I realised that I was putting an expectation on myself to be ‘perfect’. As a classically trained musician who has undergone over 15 music exams, the drive to be perfect was something I was subconsciously forcing onto myself. I was used to a world of sheet music, a serious atmosphere and avoiding ‘mistakes’. Baton Beats challenged all of that.

Music from Brazil and Africa is heavily based around, all but impossible to notate, ‘feel’. It is often lively and unpredictable. One example of this is a form from Brazil called ‘Baiao’ where there would be breaks from the main rhythm where people would get solos, and other participants would whoop and cheer and create an atmosphere. There was laughter and total freedom. Making a mistake became utterly meaningless in this context. At first, this all seemed extremely strange but I eventually found it very freeing and it has taught me lessons which I now carry over into my classical music-making.

“The participants of Baton Beats inspired me each and every week.”

They all had their own reasons for attending and each found collective happiness within the group. I came to recognise that I was feeling happiness too. I would always walk away with a positive memory of something I observed, whether that be improvement in communication between the participants, a boost in mood or improvement in their coordination through music.

I hit upon the realisation that the most important things for me to be were to be present, fun and supportive. I was able to let go of the pressure and expectation I was putting on myself and, as a result, become a much more considerate and confident person overall.

Prior to connecting with Plymouth Music Zone, I found it intimidating to talk to people who were ‘different’ to me because I felt that I might not have known what to say, or have been able to understand them, or for them to understand me. With Baton Beats being such an inclusive group, it showed me how to let go of that anxiety and just enjoy talking to anyone and everyone. It made me appreciate that everybody has a story to tell and an interesting personality to get to know. This became one of my favourite things about PMZ.

“It became a new focus for me” 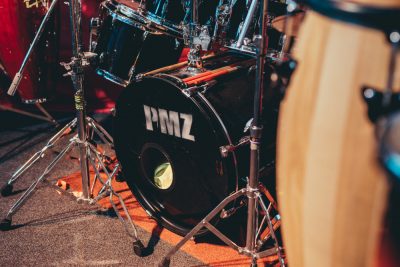 Seeing how incredible community music could be, I found myself unable to think about anything else. I was so excited to go to the workshops, learn new things and make new memories.

It is now something that I know that I want to do for the rest of my life. PMZ has given me a completely different outlook on how music can change peoples’ lives. It truly resonates with me, my beliefs and my soul. The inspiration it has sparked in me has been massive.

I applied for a Master’s Degree at the University of South Wales in Music Therapy and was offered a place to begin in September 2020. During my interview, they asked me about my experience working with various client groups and PMZ was definitely the experience that they were looking for. PMZ offered me not only the experience of working with a range of people including vulnerable adults but also within a musical environment. This was absolutely perfect and if it wasn’t for PMZ, I do not believe that I would have been accepted onto the Master’s course.

“My PMZ journey will remain with me for a lifetime.”

It was a safe, fun and educational place to work. The endless positivity of PMZ and its inclusiveness will stay with me forever. These are attributes I know that I’ll include in my future work wherever I end up. PMZ gave me opportunities and made my dream career attainable. I’ll never forget the wonderful people who I worked with and the inspiring participants during the sessions. I am sad that my time with PMZ is over but I am incredibly happy and honoured that I got to experience and be part of such a wonderful organisation. I hope to keep in touch about what we all get up to. Thank you, PMZ!

Plymouth Music Zone has just started a ‘Knowledge Exchange’ programme with the University of Plymouth so many other students like Emily will get a similar chance to learn from PMZ.