I’m a musician, and music doesn’t sound good to me any more. 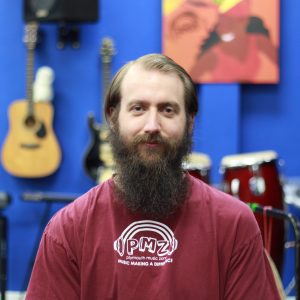 Rob Tilsley is a PMZ Music Leader and our ‘Intergenerational Coordinator’. In this honest and frank blog he talks through his experience of noise-induced hearing loss and tinnitus. Tinnitus is common, and one of a multitude of ‘invisible disabilities’. It can be distressing, so if you’d rather not read about it we understand. If you have your own story that you want to share on the topics of music and disability please get in touch with Rob.

Rob has created an approximation of his tinnitus here and invites you to turn it on as you read this blog. It’s a horrible sound and we recommend exercising caution before listening to, particularly if you already have tinnitus or hearing damage. To get the closest approximation of Rob’s experience play it loud enough to hear in a quiet room, but quiet enough that it can be masked by every day sounds like an extractor fan, a chorus of crickets or a babbling brook.

I’m a musician, and music doesn’t sound good to me any more.

It was abrupt. One day I was leading music workshops as normal, the next day something changed.

The door to PMZ’s main hall opened and a cacophony of chimes, xylophones, gongs and drums wafted out. This was a sound I would usually cherish but now it felt like my ears were being zapped by some science-fiction pain ray. I didn’t know what to do, surely this couldn’t be right. I thought that whatever was happening would pass. It didn’t.

It’s not just music that now causes me discomfort. The clink of china mugs shoots through my brain like an ice-pick. The sound of people laughing and having fun causes me to recoil in discomfort. This is my experience of noise-induced hearing loss.

A brief history of how I ruined my hearing

I’m 36 now. I knew that I hadn’t always been careful with my hearing. In secondary school I played bass guitar in a very 00’s sounding rock band. We were trying to be Rage Against the Machine meets Red Hot Chilli Peppers, meets Deftones meets Nirvana. We called ourselves ‘The Alternate Theory’. Our uncompromisingly loud drummer regularly split cymbals by playing them so hard! Naturally, we’d all turn up our amps to match his volume – what other choice was there? After completing my music degree I started running a community Samba band, practising for hours on end in a tiny room. I thought everything was fine; my hearing still felt normal, I hadn’t noticed any change. 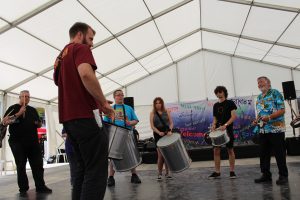 As I progressed through my 20’s I became ‘that percussion guy’. This felt pleasing. I’d seen my ambitions to become a professional bass player fall by the wayside. Similarly, I’d failed to become a sound engineer. All of the bands I’d formed or joined dissolved and wound up before they did any significant gigging. In percussion I’d found a niche. It was a bit of an accident really. I’d never intended to be a percussion workshop leader but that’s what I was, and I was shredding my hearing.

I expected that I’d notice hearing loss. I thought it would be like lowering the gain on a mic – that everything would get quieter. The truth is more complicated. Damage from noise-induced hearing loss manifests in many ways: you can gain tinnitus; lose the ability to tolerate loud sound (hyperacusis); and lose clarity. I noticed that I wasn’t able to make out people’s speech as well as before but nothing sounded ‘quieter’.

I was reluctant to tell people that I had acquired tinnitus, it felt like some kind of embarrassing mistake. When I did finally tell people, I found out first hand just how common it is.

Two friends of mine had developed it. One from teaching drum kit (despite using foam earplugs) and the other, who is significantly younger than me, from practising snare drum. I also learned that many members of my family were living with Tinnitus. For my mum it had come about through hereditary hearing loss, for my aunt it was working in pubs, and my grandma had got it from working with typewriters.

Living with tinnitus, as about 10 – 20% of the adult population knows all too well, is not fun. It’s always there, just waiting for a quiet enough situation to make itself apparent. There’s something about it that cuts really deep too. Sure, it’s just an annoying sound that you hear when it’s quiet, but knowing that it’s permanent, that you’ll never hear silence again (ever) is a lot to process. It’s also the quiet times that can be the most precious.

I remember getting my toddler to sleep one night after a real struggle. He was  lying peacefully in my arms, but in the complete silence of his bedroom the tinnitus screeched in my ear. I couldn’t bear it. I had to leave the room and find some noise to mask the tinnitus. This hurt much more than any nerve damage.

Evolution doesn’t care about your hearing

The very fact that you can damage your hearing at all is down to nothing more than a quirk of evolution. As far as I know, you can’t damage your sense of smell by smelling too many smells no matter how strong they are. A common ancestor of all mammals just so happened to gain a mutation which meant that it didn’t bother to replace damaged nerve cells in their hearing organ. Birds, fish, reptiles and others simply replace theirs as they go. Evolution doesn’t care though, and our mammalian ancestors went about their business; it never hindered them enough for the trait to be selected out. Jump forward 300 million years, and here we are in a loud world where it’s all too easy to irreversibly damage your hearing.

It was avoidable. Here’s what I wish I’d known…

It’s okay to remove yourself from loud spaces (e.g. a wedding party). The P.A. is at maximum (it always is), so you can’t hear what anyone is saying and you don’t even like the music. This is a total waste of your hearing, and for what? To avoid feeling rude? Overly loud P.A.’s are an utter plague and public health menace. Sound engineers don’t have much of a choice but to be there, exposed to the loud sound for the duration. And in my experience, if you try to have the P.A. on anything but full volume, people demand you turn it up. Ridiculously loud music is expected (enforced even) by our culture. Let’s change this!

The duration of the exposure to sound matters. It’s recommended that you take a 16 hour break after you’ve had loud noise exposure. Also, the amount of time you spend in the loud noise is critical. I think that the band practises we used to squeeze into 15-minute breaks at school probably didn’t do that much damage, whereas three-hour band rehearsals were probably hugely damaging.

Expensive, moulded ear plugs are well worth it – they’re amazing! You can still clearly hear conversations with them in (well, I would have been able to if I didn’t have the damage in the first place), and music sounds phenomenal through them. I think these alone would have saved my hearing if I’d know about them and known what they felt like to use. I had used foam and flanged earplugs before, but it turns out they wouldn’t have event provided enough protection for what I was doing. I also found them uncomfortable and they made everything sound terrible – even the ones that made claims to the contrary. When I was first advised to get moulded plugs I didn’t feel that I could justify the £200+ price tag. That feels utterly ridiculous now, particularly as there are schemes like this out there.

If you’re struggling with hearing related issues, seek help quickly through your doctor. I regret not asking for help sooner. I found these organisations helpful too: Action on Hearing Loss, British Tinnitus Association, Hear for Musicians,  Audiologist Dr. Clifford R. Olson has a good YouTube channel – I found this video of his on tinnitus very helpful and it has good recommendations for apps that can help too. There’s also a fantastic article here from Aging in Place with lots of statistics and information about hearing loss.

Facing the rest of my life with self-inflicted hearing damage…

I learned this from my audiologist that hearing aids will help me in the future. Hearing aids will bring back the quiet sounds that I have lost and mask the tinnitus. My moulded ear plugs allow me to keep on leading music workshops safely and come in handy in lots of different social situations. There are hopes in the pipeline for hearing restoration and tinnitus treatments, but they must not be relied upon as they may well never come to exist!

Months now from the onset of tinnitus, I have come to accept that it is a part of me – there’s no point in fighting it. It is now my new normal, but I’m worried about how things will progress as I age. Will it get worse? 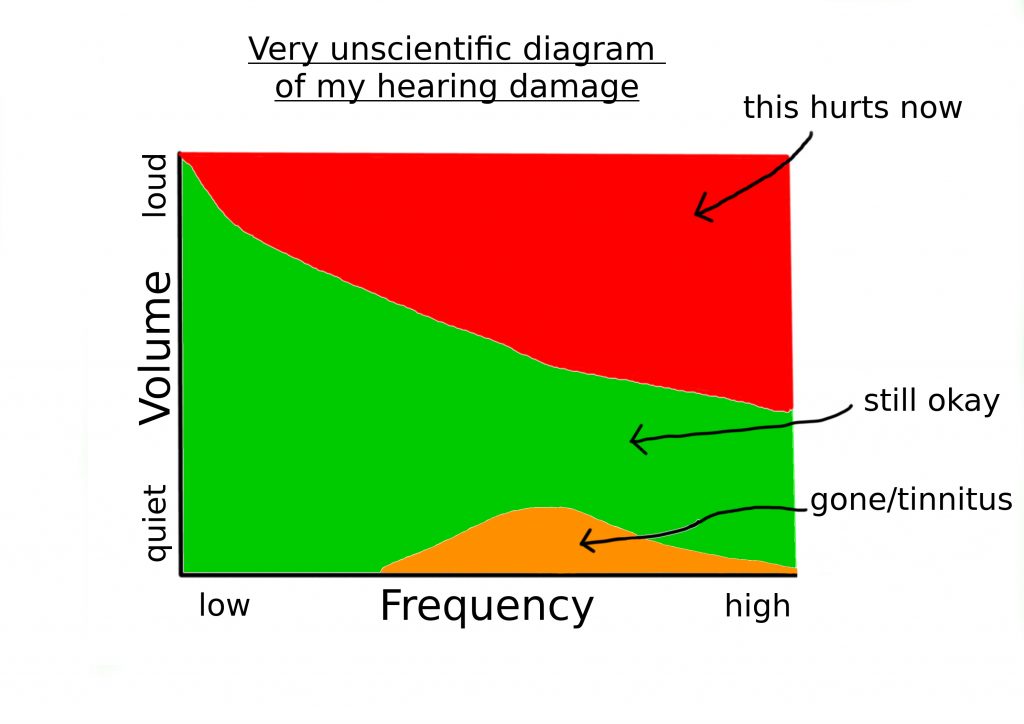 A new relationship with sound

I remember listening to and playing loud music without the discomfort – a sensation I would love to have back. I’ll never hear the full, real sound of a room of participants playing in my workshops, I’ll never be able to crank the volume on the stereo and let the sound wash over me as I used to. The albums that I can’t imagine life without are still there, but now they’re muted.

I have made some unexpected discoveries along the way. One of them is that the joy of playing and sharing music is unaffected: when a drum pattern has a grove it still feels groovy and pleasing to play. When I lead a workshop and see people smiling as they enjoy making music together, this still makes me happy. It’s just that now, as good as my earplugs are, the music is distant compared to what it used to be. It is an odd sensation.

I regularly feel hopeless about the situation but I’m trying not to allow it to limit me musically or in my life more generally. This experience has been a real challenge to my identity and I’m trying to work out who I will be. For the time being I’m going with ‘that percussion guy with damaged hearing’. I feel that I haven’t finished processing all of these changes. I will keep you updated. 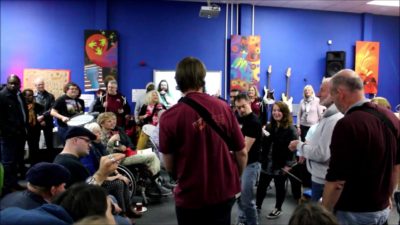