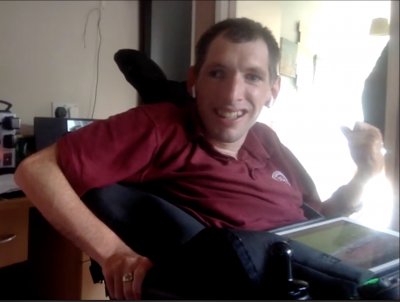 Tell us a bit about yourself and your relationship with PMZ –

I’m Mike. I initially started as a participant in a group, then I did one:one sessions to develop my music. I was a ‘Disabled Apprentice’ for a year and then applied to become a volunteer after that. I’ve been around at PMZ for a long time!

Which different groups do you volunteer in at the moment?

What were your thoughts and worries about coming back to PMZ and reconnecting in person?

I was worried about travelling on public transport to PMZ. I was wondering how we were going to do sessions with social distancing in place – this has happened and it’s worked well. Sometimes you have to remind people about masks, other than that it works well.

I was most worried about passing on Covid to other people. This included my worries about going into care homes knowing that a lot of them have had outbreaks.

What are some of the positives about being in the building again.

The break seems to mean that in a few of my sessions attendance has improved.

Everybody has been so understanding – keeping their distance and wearing masks where necessary. The team understands my anxiety – we can always meet and talk about it.

In your observations as a volunteer working in different groups, have people got more comfortable about being back together in person?

I think the most confident group is now probably Moving Sounds, which is quite a change from the hesitant start, with the numbers of people coming to it going up and up and up. The attendance is steady. It’s very rare that we get any less than 10 or so people.

I think given what was on the tv at the time, people were very worried about how to approach just general working practices and being together. There were some people who had joined the zoom sessions, but others who didn’t because it didn’t work for the, so being back together in the building was better.

At Baton Beats we did a phased return – not everyone at once. This was to do with limited numbers being in the space at any one time. We wanted to find a way to include the Knowledge Exchange students from University of Plymouth, so a phased return worked well. A core group began and then things opened up so that we knew we were doing everything we could safely in the pandemic situation.

The Musical Misfits were a group where the numbers have built back up following the main pandemic / lockdowns. We had done sessions together on Zoom, but not everyone did these. People have asked to recommend the session to other people – encouraging others to join. People are starting to open up with each other more – caring about those who aren’t around. It felt like we were almost having to start from scratch again, particularly as we had been working towards a big performance before Covid that was stopped.

I still worry about the outreach sessions where people’s comfort levels are different to that in the building. It’s always been my fear to pass Covid onto someone else, so I try and stay socially distanced and wear my mask at all times.

I think the attendance has been even better because we are working in a different space.  People are comfortable being together.

I think music making together helps people. I see it as not just about a music making exercise – it’s a socialising thing too – like getting people thinking and talking about things. The music is sometimes secondary to me.

One lady sings her own songs and automatically starts singing by herself. I’ve noticed it a few times and it’s really moving. We join in with her.

I’m very aware there are a lot of songs I can’t sing because of my own emotions which are attached to my family history and bereavement. I am happy to stay in the space and listen, but singing them chokes me up because it’s often to do with the words in the song or knowing that a person used to like that song – something like that. For example, ‘The White Rose’ gets me, even though it’s not one I knew before – it just brings back a lot of memories.

What have you missed about being on Zoom?

Nothing! I used to get quite frustrated when plans wouldn’t go how you wanted because of technical issues.

What do you think ongoing anxieties and worries might be?

For me it’s more the fact that soon people aren’t going to be testing for Covid-19 and it’s a bit unknown.

I would say for me it’s more like things like when someone I saw learning to play Marimba – getting into something new and now they’ve found their instrument. I’m thinking of Rachel (refer to Rachel’s blog). I’ve seen it happen.

Recently, I know it sounds simple, but I know that for one participant, they love a cup of coffee and social time in a session – that simple thing is a pleasure for that particular person.

Quite often there’s a lady who doesn’t socialise with others, but as soon as we start the music she starts getting involved with the group. It just proves that music can get people together.

When it comes to The Rise – I think yes because they quite often say each week that they look forward to it each week and that they feel better.

I think people value PMZ, but don’t always show it – they come in and act as if they’ve never been away, so it’s hard to say if it’s more value now.

It was very difficult to set up for the groups at the start, in terms of things like Moving Sounds – initially in the middle of the room and the chairs around, but now we let people come and get what they need one by one – the way we do things has changed since coming back together.

What do you get out of being a volunteer at PMZ?

If I’m honest – more than people realise. I’m not just saying that. It’s not just about the music for me – it’s the social aspect, music and helping other people. The one thing that gets me is that me having a disability – nobody treats me any different. I get support when I need it though. I have some friendships here that mean a lot – 100%.  I’m also a big advocate of using humour to help other people realise that although I’ve got a disability I can still have a bit of a laugh.

Anything else you want to say about PMZ?

I love the camaraderie in this place and… the music!