Music for Grief: The Colour of Her Words 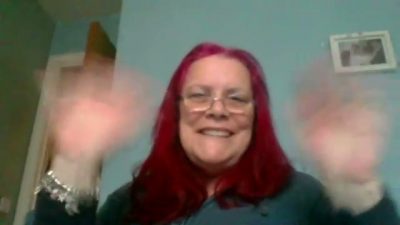 Here PMZ participant Rachel explains how she was introduced to Plymouth Music Zone and then later became a participant, benefiting from making music first to help her through her experience of stroke and then working her way through grief. This is an inspirational account from an amazing woman.

I found PMZ through volunteering for the Stroke Association and joining in with Paul White’s singing sessions. I used to support a lady who was coming along and help her out by singing in her ear, encouraging her and helping to get the connections going.

My own stroke was on 25th June 2014. It started with my hand and I had no sensation in my feet. It was unbelievable to think I had a stroke because I’d been carrying on as I always do. For whatever reason, that all started my wish to volunteer just a few months after my own stroke. It made me become a braver person – a new me almost.

There is a grieving process that happens through having a stroke because you’re not the same person that you were before – mentally, visually…your disability changes things. It was weird – things like when I looked at a tree I had to work out what I was looking at. With a traffic light – I remember thinking about that –there were the red spots like an alien – I had to re-learn what that button was for.

The lockdown thing has been like re-living the stroke again in a way. That kind of having to learn things and the world feels different and strange. 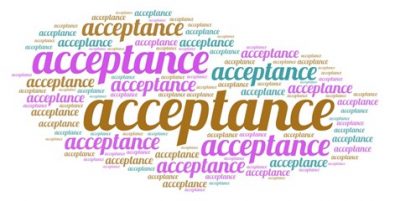 As well as making music in PMZ’s ‘Brighter Skies’ sessions with Anna, I’ve shared some of my story and what has brought me to ‘now’ and wanting to put this blog together to help other people.

Having lived through domestic violence situations over a long period of time, I wasn’t very confident. I remember when I lost my dad back in 2009, my partner at the time wouldn’t allow me to grieve for him. I just couldn’t. A little while later in about 2010, I heard Ozzy Osbourne and his daughter Kelly do a version of a song together called ‘Changes’. I remember hearing it and the words and everything – wanting to make a change and be allowed to grieve however I needed to.

I could write a very long list of all the not-good stuff in my life before, but this is my story of allowing myself to grieve and I hope it helps other people too. It’s everybody’s right to express themselves and be safe in their own skin. I had a tattoo done of Betty Boo that reminds me of this – on my very own skin.

In the Brighter Skies sessions, the words all come from me at some point in the music, as well as shaping up my ideas and what I wanted to reach out to others with in this blog. Anna listens to things that I have said and we work on putting them together as songs and ideas to help express things I’ve been thinking about. 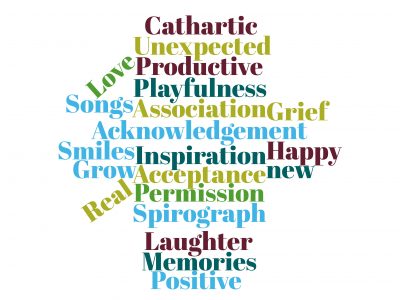 For example, ‘bouncebackability’ is a word I created to describe picking yourself up. It’s not always possible when you’re grieving. Everyone goes through bereavement differently. You can go from manic to super-calm, or avoiding things – like an Ostrich burying it’s head in the sand – whatever the expression is! Or a Kangaroo bouncing off – whatever metaphor really!

The ‘Brighter Skies’ music sessions started up in 2019, just a month after my Mum had passed away. She’d had a long illness living with Alzheimer’s and for those last four years she was completely stuck in and it must have been awful. At that time I was finding it hard to work with my memories because hers were so different and confusing.

However, in the first music session we did some talking and experimenting with some ideas on the piano and things that were in the room. In just two hours somehow we had a piece of music there that helped me describe that grief. I was seeing and hearing words back and I got something – a keepsake.

It’s really helped me a lot and I want it to reach out to MILLIONS! Seriously – I hope other people will get on board and give music a try. For me, rather than a ‘shrine’ kind of thing with my memories, I have a piece of music and that’s really therapeutic.

This was the first song I did with Anna. It’s called ‘The Colour of Her Words’. It came from my drawing of a butterfly. I was thinking about a plant that we used to have. 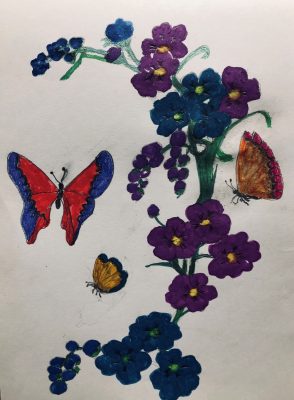 Here’s the thing…
It’s not just a duffel coat,
It’s you standing there.
With your jet black hair
Always in a bun.

She did some things…
Our mother did,
Painted our room – changed it to white.
It’s like a cloud, not just a quilt.
Always standing there – watched us when we slept.

Over the years, you were trapped in time,
Your words for days, stuck on repeat.
My emotions were all rising high.
Before you left, we hoped that you could stay,
Like little lights.

(Bridge) …from one song to another song, when I heard her sing,
The colour of her words and happiness it brings.

Here’s the thing…
It’s not just a duffel coat,
It’s you standing there.
With your jet black hair
Always in a bun.

Plymouth Music Zone · The Colour Of Her Words

There’s also a lot of playfulness and improvising in the sessions where we don’t use any words. There was no pressure at all, but I had a go at doing something completely new. Here’s a piece we made (along with a lovely video of trees!) when I was having ago on a Marimba for the first time. We had some echo effects when we recorded it (that was fun!)and I was completely focused on playing around with whatever happened. The other thing I liked was the way the Marimba fitted with things in the video with the trees. I like to be able to say ‘That’s mine’! I can now recognise the sound of it when I hear it in other music!

This example is where I was making music that was spontaneous – a bit like how grief is – and the outcome can be amazing.