Before Covid – as Plymouth Music Zone’s ‘Intergenerational Coordinator’ Rob Tilsley used to arrange an ambitious project called ‘Rhythm and Respect’. The project brought people together from different circumstances and backgrounds together through music. This year (2020) brought school pupils together with adults with learning disabilities. Despite the project being cut short by Covid, it was a very positive experience for everyone involved.

In the lead up to the two groups meeting each other, I visited each separately and asked them – ‘How do you think people in the community see you?’. The pupils found it easy to come up with many positive and negative things that people might think of them. We made a small recording using some of the negative things which you can listen to here.

The Plymouth Highbury Trust group (adults with learning disabilities) when asked the same question could only think of positive things. They thought that the pupils would love them.

The two groups had many differences, but not being able to conceive of any negative prejudices that others may hold of your community is, perhaps, a particularly striking, and refreshing one. 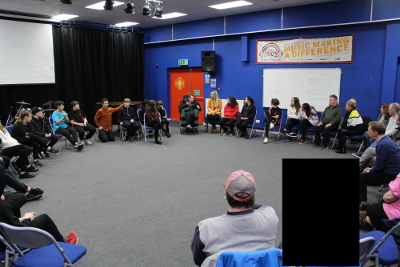 Plymouth Music Zone’s ‘main hall’ is a large space but as we were setting the 50 or chairs we needed, it was starting to feel a bit small.

The pupils arrived first, they shuffled into the building quietly, looking sheepish. They perched noncommittally on their chairs, looking like they were ready to leave at a the drop of a hat, and I got the feeling that they were actively looking for a hat. We waited. No sign of Highbury. This was normal – getting 15 or so adults with learning disabilities onto a minibus is no mean feat. There is such a diversity of needs within the group including anxieties about going to other buildings and quite a range of challenges with performing tasks, be it tying shoelaces, gathering belongings or bathroom visits. Needless to say tension built in the room as we waited, not unlike the feeling you get when you know a thunderstorm is approaching.

The Highbury group arrived five minutes late and the quiet atmosphere is shattered. Highbury participants burst through the doors – laughing, giggling, speaking loudly and confidently (many of them know PMZ and the staff well because they have attended groups for years).

Reflecting on this moment a curious image flashed into my mind. To explain it, we’ll have to take a bit of a tangent to talk about lightning. Lightning is caused by exchange of energy between positive and negative charges. As the conditions for lightning develop, an invisible (to human eyes) process happens where channels of ionized air called ‘leaders’ appear to search for a connection. When a connection is made, a vast amount of energy is transferred in a bright bolt – that’s what we see as lightning.

At the time it was happening too fast for me to see, just as lightning leaders aren’t obvious, but in the room connections were being made, in all directions. Eye contact was being made and broken, subconscious body language conversations happening left right and centre, reactions to each others facial expressions, pockets of laughter. This way that humans naturally connect to each other, this was what made me think of ‘leaders’. After the leaders, that’s when the exchange of energy happens, and sure enough, it did.

The first activity was a copying game without using verbal cues. One person is chosen to lead the group. They gesture, create ‘body percussion’, pull silly faces etc, and then everyone else mirrors the leader. It’s the kind of exercise where you can get a group to be inclusive without them even knowing. The non verbal aspect is inclusive and a leveller. Another strength of this game is that people can’t help but give us little signs and cues about their personalities, whether it’s an unwillingness to play the game at all, or someone taking the rules of the game and running with it.

The next activity was where one participant from Highbury and one from the Creative School had to stand next to each other and improvise on synthesisers that I’d set up on a table. Virtually no direction was given, none was needed, connection was intuitive. They looked across to one another, listening, reacting and the results were outstanding, you could feel the room lighting up with laughter and appreciation. I wonder if they might have forgotten about their differences for the most part by this point. When you’re laughing at the comic timing of a synthesiser’s tone, or applauding a moment where something beautiful happened, everyone was feeling the same thing as everyone else.

After the workshop, one of the pupils said that they never get a chance to do anything like this usually. This comment really hit home, and made me think about just how divided a society we’ve built. The division gets you thinking about historical treatment of people with learning disabilities and schooling structures and different versions of tolerance and intolerance toward one another particularly to those who are deemed to be be different or other. It sets the default though, all of the architecture and city planning keeps groups like these apart. Getting them together required a lot of effort and energy from all corners, fighting against the far easier possibilities of just carrying on as normal.

It was a lightly planned workshop. The games and activities were designed to get a sense of what would or wouldn’t work, so they weren’t deeply calculated, yet the connections made were hugely powerful. The conductive medium of music allowed a massive energy exchange, the effects of which will hopefully rumble on through the lives of those involved.

When it was all over, Nick, one of the staff from the school who came along to support the session said: “It felt natural, felt like we all just engaged well. I was knackered from the week and it’s brought me up, I feel so much happier.”

One pupil commented – “it’s given me a warm feeling inside my heart, and I want to feel it again”.

Questioning what inclusion really means takes effort, sensitivity and thinking outside the very apparent boxes that are still exists surround us. It’s so important that we continue to challenge what inclusive practise really means in our work and our wider lives.