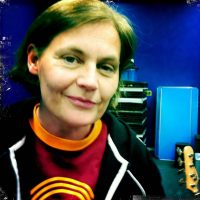 What do you do for PMZ?
My job is to lead the team down the right road and hopefully inspire them in the process! They certainly inspire me. I’ve been here 16 years and not a day goes by when my heart doesn’t burst with the sheer pride and joy of working in a place that is all about making things happen for people.

Do you play any instruments?
I play guitar in a manner of speaking. Compared to everyone else at PMZ I’m terrible. Compared to my mum I’m fabulous.

What musical instrument would best describe you as a person?
I feel because I’m Scottish I should say the bagpipes. But I fear people might say it’s because I’m an old bag that makes a bit of a racket if you don’t play with me properly. And I’m obviously nothing like that. Honestly.

What has music done for you in your life?
I hail from a large Irish immigrant family of singing, guitar playing drinkers in Glasgow who spread their love of country and western music in the wee small hours by keeping me awake on many a night as a child. Patsy Cline was my bedtime story. Music has been my therapy ever since.

What’s the best bit about working at PMZ?
The best bit is seeing people find their voice especially those who’ve never quite been given the chance before, it’s witnessing the extraordinary power of music to change the world, a little bit at a time.

What’s the first record/CD you ever bought?
I bought two at the same time. Yes Sir I Can Boogie by Baccara and Daddy Cool by the Darts. Then forced my brothers to dance to them while I stood and switched the light on and off disco style.