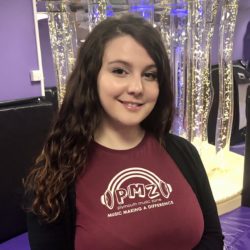 What do you do for PMZ?
I was previously a music leader where I worked with Early Years, Refugee groups and SEND music making. I am currently now back working in Early Years music making.

Do you play any instruments?
I’m a guitarist, a singer and dabble on the keyboard and laptop to create my own music. My main focus as a musician is songwriting and being creative!

What musical instrument would best describe you and why?
My Sandpiper guitar is the best match for me, because it looks delicate and almost fragile but can create a bigger and brighter sound than expected. I have never played another guitar that emulates so well, the message and sound that I am trying to put out there.

What has music done for you in your life?
Music has made my life. It has led me in every direction I have ever gone in. Music has supported me when I’ve needed it and it’s inspired me to be a better musician and a better person. Music has also led me to find and create unforgettable memories with the most important people in my life.

What’s the best bit about working at PMZ?
I truly believe that music can help support people in so many different ways and PMZ is the epitome of that. I feel lucky to have gone from being a participant to an apprentice to a music leader. And it’s truly wonderful to have gone away to study music to return to such a friendly community of people.

What’s the first record/CD you ever bought?
I remember using my pocket money to purchase All Saints- Never Ever on CD which would be the first CD I ever bought myself. Embarrassingly so, the first CD bought for me was Mr Blobby’s single. Can’t beat being a kid in the 90s!