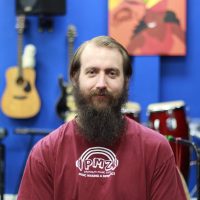 What do you do for PMZ?
I coordinate the Knowledge Exchange project with Plymouth University.

Do you play any instruments?
My specialities are Ghanaian Drumming and Latin Percussion, these involve being proficient playing a wide range of percussion instruments, I also play guitar, ukulele, bass, drum kit and piano. I have been known to pick up a Gaffophone from time to time but the less said about that the better.

What musical instrument would best describe you as a person?
Crystal Baschet, it’s one of a kind, it’s weird and it does things in its own unique and somewhat awkward way.

What has music done for you in your life?
I didn’t speak until I was 3, I couldn’t decide if I was left or right handed, to this day can’t spell. Music was the first thing I was ‘good’ at. In primary school I became top of the class at playing recorder and music showed me that I could succeed.

What’s the first record/CD you ever bought?
I’m going to go with the first record I bought because I can’t really remember what the first CD was, and if I could it would no doubt be embarrassing. After being given a record player for Christmas by my girlfriend (now wife) in 2006 I went out and bought the soundtrack from 2001 A Space Odyssey which has been a hugely important musical influence throughout my life.